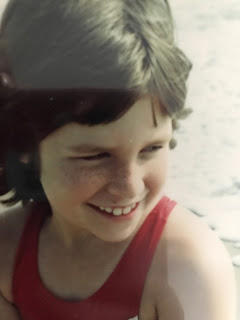 Turning 10 years old was a very big deal to me. My age had TWO numbers and I was officially on the way to being a grown up- the magical thing I wanted more than anything else in the world. My little girl heart desperately longed for the grown up-ness of life to begin. I thought if I was a grown up I would securely fit in, fit most somewheres, that several if not all someones would understand me. That what made me hard to understand was the child part of me, which at 10 years old was most of me. That I would be credible, lovable, and believable if I was a grown up.

When I quit drinking I wanted to be a person who was a grown up sober person. I didn't want to be a beginner-a sobriety child- I wanted the convincing distance that age of doing a thing for a long time gives you. It was a sense of security, of being able to be believed. Just like wanting to be a grown up as a child, I imagined long term sobriety/recovery would give me the credibility I longed for. That people wouldn't be smiling with goodwill upon hearing I quit drinking and also hiding behind their back the fan of skepticism cultivated from seeing too many people say one thing and do another.

The interesting thing about quitting the thing that stunts your growth and keeps you from your dream is that it forces you to grow in a whole other ways besides up. My freedom from alcohol now, living my 10th year, seems like such a small step that was also the biggest thing I've ever done for myself. It was a first step, a footfall. A choice. I thought the biggest thing was the quitting, but really it's all the daily things that happen after that that are the big things.

When I think about the morning I quit, I still cry. It feels so close, the kids innocently small, me a sick sack pinned to the bed so hungover I couldn't speak or move. The slats on the closet door. The love I found for myself that morning, that I dug down and found my worth, my heart. I didn't know that I did that until now. Then I just thought I was miserable, on my last ditch, and if I didn't quit I would lose my children's love and respect, that as soon as they grew up they would get as far away from me as they could. I had to quit or lose them- that was the choice I made then. I could slowly kill myself but I just could not kill their childhoods.

The boys were 7 and 4 when I quit. They're 17 and 13 now. They are bigger and beautiful, we have solid close loving relationships and both of them thanked me for being there for them in the birthday cards they each made for me. I have wept a bit every day since with gratitude for who we are together. The scariest thing I imagine is how different their lives would be had I drank for the last 10 years. What their lives would be like today if I was still a blackout drinker. How big my mountain of shame would be. Would I still be alive? Would I be alive but dead to them?

But my children know. I have been open and age appropriately honest with them and we talk about my drinking and why I did it and what they remember about it and what they think about them drinking or using drugs themselves. I am incredibly proud of how quitting drinking makes me the mom I always wanted to be. Present. Loving. Honest. Patient. Supportive. My children love me. We love each other.

I am also incredibly proud of how quitting drinking makes me the grown up I have always wanted to be. Present. Loving. Honest. Patient. Supportive. I love myself.

Now I think being a grown up means you learn that there's a lot more to things than you thought. Yes, I did quit for them. What I've learned is that I also quit for myself. As I've reflected on these past 10 sober birthdays and the years that go along with them I am pleased to realize that along the way I found the love I have for my children for myself. There is both.

That by being their grown up, I also became my own.

Email ThisBlogThis!Share to TwitterShare to FacebookShare to Pinterest
Labels: being proud getting sober, learning, life lessons, proud, sober, sober birthdays, sober like this, sobriety and children